Every live music experience is special in it’s own way. I love live music. I love the entire experience. From beer soaked joints packed tight to massive stadiums filled with screaming crowds, every experience is unique. And the band does not have to be perfect. in fact, it’s better if they’re not.

I got to wear what I wanted…

I mean, it’s not like I don’t wear what I want, well, most of the time, but, all of a sudden my pleather and tassels were acceptable. I fit right in. I was tickled pink that I could dawn my stretchy pleather pants and strut around in my buckled boots. Yeah bitch!

It was an outdoor setting on a beautiful day, which we don’t get too much of here in freakin’ Canada. Basking in the sun, beer in hand, band on stage – you can’t ask for more. The drive up had been stressful on a packed highway with a bunch of other jackasses gunning it to the concert. The evening unfolded, starting with tacos and beers, and sliding into an early arrival to the outdoor venue. We had plenty of time to enjoy the amazing opening band and to chat it up with the friends who had joined us. I was relaxed.

Of course, GnR was – well – GnR. My long time beloved front man had been dwindling for a while. But I knew this. I was prepared. He held his own – well enough – for me to be delighted by the somewhat reminiscent screeches of the wild orange maned Axel of my youth. Even if it only came in small glimpses between rest breaks, during which I’m sure he was guzzling water and gulping down oxygen from a tank behind the stage. Still. I got to see Axel one last time. 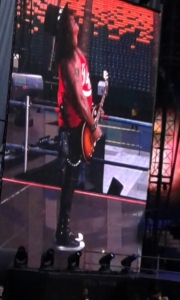 Then there was Slash. Slash is Slash. The single syllable ignites recognition in music lovers of all ages. To this day, I swear he is one of the best live performers I’ve ever seen. And I’ve had the chance to see him multiple times. The day of the outdoor GnR reunion, I got to see him again, with the group of wild maniacs that to this day are my favourite band of all time. Slash ripped it up, seeping his cool energy and sliding around on stage like a serpent. He pulled the concert along for the nearly three hours that I basked in his guitar god glory.

Finally, there was Duff. Duff was along for the ride, side by side with Slash. I’ve seen the two of them separately. Seeing them together lit a fire that ripped right through me. If you haven’t, take a look at the Duff of the late 80s GnR, then take a look at him now. Ripped up like a lean machine, his deep riffs match his six (or is it eight) pack. When Duff walks on stage, my body tingles. There is just something about him that says “Fuck I’m cool, but really, I don’t give a Fuck.” It’s electric.

So yeah, I went to see old reunited GnR. And I had a fucking amazing time! We all love live music for our own reasons. You have yours. I have mine. Knowing what you love and allowing yourself to live in the moment and be part of it – well – don’t you miss out on that! 80s Metal Forever.