My first exposure to WolfMother was during a stint in San Diego. I had time to lounge on the roof top and gorge myself in the wails of the rock gods. Somehow, I came across WolfMother. The track Violence of the Sun had me totally hooked. The lead singer – Andrew – had the rock god voice that I longed for, that I needed to be a happy, full human being. The rough rock vibe pulled me in to the acid rock, classic rock, metal concoction that I couldn’t get enough of.

Besides a lot of sun, San Diego also has a cool downtown with a real music vibe. In the heart of it all, there is a House of Blues. If you have never been to a House of Blues, when you get a chance – GO. These five hundred to a thousand person venues are built for the ultimate acoustic display. Standing room only. Affordable tickets. Amazing bands. You simply can’t go wrong with a show at a House of Blues.

Lucky for me, WolfMother was playing at the House of Blues in San Diego while I was there. Also lucky for me, my hubby will go to any show I want. He’s a good sport. 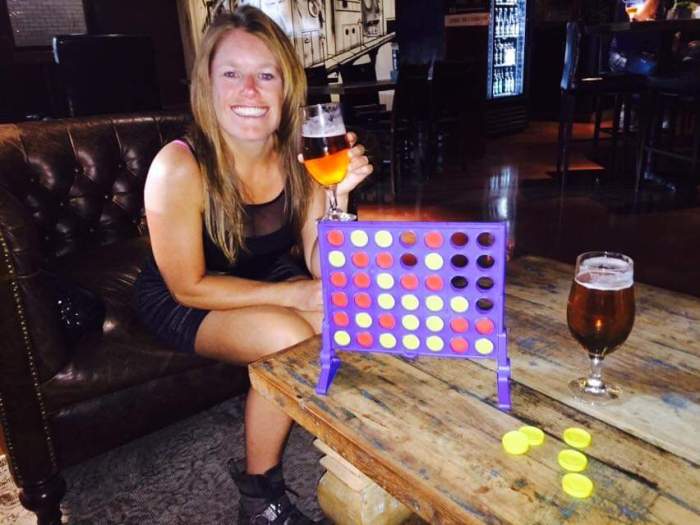 The night unfolded old school style with Belgian beer and games from our younger years.

When we arrived, the opening band was in full swing. They’re killer – but we’ll leave that for another day. The place was packed. I’m short. Really short. So the ground floor wasn’t going to pan out if I wanted to get a look at Andrew while I head banged to his guitar riffs and wild vocals. We meandered to the upper floor. A serendipitous moment unfolded when another couple, standing by the balcony, befriended us. She was my stunted height. He was towering over her, as my husband towers over me. They determined that the tiny women should stand at the balcony while the towering men stood behind us. Now, I could see everything. And, we’d made new friends.

To put the cherry on top, I was drinking Cali Creamin’, a delicious, creamy, vanilla tinged beer that I can’t get at home. Delicious.

The opening act ended. WolfMother emerged. The show unfolded in a hypnotic haze of coloured lights that dimmed your senses, guitar riffs that pulsed through your gut, and the vocals of a true rock god who can reel you in, take you on a journey, heightening at every turn, until you’re satisfied and depleted. I loved the psychedelic, Zeppelin vibe. I loved the strength of Andrew’s voice as he climbed to heights only reached by a true rock god. I loved the energy. The entire show was momentous.

The second cherry on top was when Andrew took his shirt off. Of course he did. He’s a rock god.

Miss out on other great Metal posts? No worries, rock out here:

Ode to the Lizard King

Hanging by a Finger from a Balcony, Infused with Rye, and Steven Tyler….